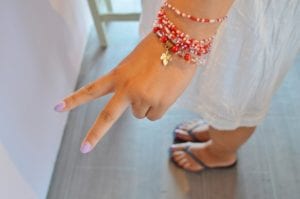 The popularity of wearing a red thread on the wrist in the modern world is dictated by many reasons – the dogmas of religious teachings, superstitions and quite practical purposes. This “accessory” can be seen on the hands of celebrities – movie and music stars, politicians, shows and other spheres of life. Copying “celebrity” in everything, takes place in the circle of ordinary citizens. However, one should not blindly imitate all idol habits – the energy of the red thread on the hand helps, but requires respect and proper application.

Fashion or an effective amulet?

For the first time, the amulet became known from the religious teachings of Kabbalah – the ancient Jewish Scripture. Mention of the amulet is in Buddhist and Hindu faith. Each current empowers a talisman with a miraculous power to withstand corruption, evil eye, negative influences of the living and the dead. But to regard the red thread on the arm as a panacea from any misfortunes – at least, it is not serious and to attach universal significance to it – it’s silly. However, faith works wonders and, combined with common sense and proper application, is able to influence the aura of the possessor.

The first two moments should be accompanied by a conviction of a successful outcome. “By faith it will be given” – a Christian truth applicable to all religions.

Does it matter which limb is tied with a red woolen thread? In the light of the religious attitude – yes, it does. In detail:

Often you can see the red thread on the leg. Meaning too, as in the hands. Wearing is dictated more likely by practicality – the thread on any hand is easy to tear.

The meaning of red color and composition of the thread

Interested people, of course, are concerned with the question – why the thread is woolen and red. Kabbalah and other teachings explain this in different ways, however, they agree in the following: for a shade, Mars answers – a planet of strength and power, and to appease the higher powers, only natural materials are needed – wool, cotton, silk and linen.

Therefore, if you can not get the wool, then the red silk thread will do. It is even more practical.

The correctness of the ritual depends on the faith of the bearer of the red thread. The legislator of “fashion” is an accessory – Kabbalah, conducts a rite with reading prayers, Buddhist currents – using smoldering and emitting fragrant smoke, sticks, Slavs have their own laws and so on. Read more:

It is conducted by a person who knows the Jewish prayer. Usually such a ritual is typical for travelers or pilgrims to holy places, for example, to Israel or India. There is a guard and is purchased for money – it is impossible to take a gift or tear off red threads from the nearest coil. Further, it is important that a person tying up a talisman has a warm feeling for you – a monk, a spouse or a parent. Reading the coveted words, he must tie a red thread on his wrist, forming 7 knots – the number is considered magical. The amulet must hang freely, do not squeeze hands. 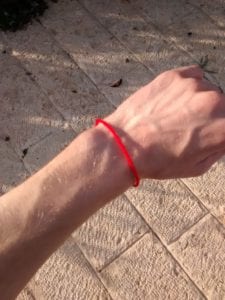 The essence is similar, the only difference is in prayer – pagan culture operates with conspiracies. In addition to them, the strength of the red thread adds holy water and candles – the charm is dipped and fumigated. Actions contradict the very idea of ​​combining Christianity and paganism, however, the method is popular. By the way, prayers can be both ecclesiastical and “znacharian”.

It differs from those described only in that in this religion only a man can wear a red thread on his right hand, responsible for prosperity and strength – a strong sex takes on all responsibility for providing and protecting a kind. You can choose the appropriate surah in the Qur’an or other Muslim scriptures that help the suffering.

Even if a woman does not belong to any religious stream, or, in general, an atheist, becoming a mother, she unconsciously seeks to protect the child in all ways. In this case, the red thread to the child on the wrist is a good option to calm your own soul and ask for help from the higher forces. Mother’s prayer has the greatest power in its energy, than if it were about requests for material prosperity – sincerity is equivalent to faith. Red silk thread or woolen is put on the hand even to the newborn.

How to wear a red magic thread

Before the ritual, you need to think about the question – why do you need a red thread for you? It is impossible to confuse the desire to buy a new home and get rid of the attacks of the mother-in-law. It is important to review our own lives and understand what prevented them from realizing their dreams before and what will help them. It’s not too bad to spend a few days in cleansing and praying.

After the ceremony, the owner of the red threads must remain pious. Mute to reproaches, not malignant and ready to come to the aid of the suffering. There is also a visualization of the conceived – even by psychologists it is proved that thoughts are material and help to bring the dream closer.

What to do if the amulet (red thread) tore

There is no bad sign in this. Kabbalists consider the torn knot, on the left limb, full of negative energies and get rid of the mascot, tying a new one in its place – the thread on this hand is responsible for the soul and the aura. The right thread is also just changing. Quite possibly, during the time of wearing, a person will reconsider his own views on life and will do without an amulet. But it’s never forbidden to wear a bracelet again. 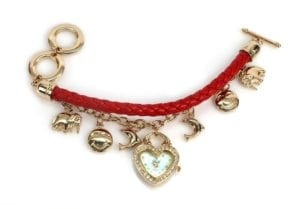 And finally. Now salons with ornaments offer numerous accessories from red threads. The owners of the amulets were divided into two camps – some believe that the charm, fitted to a certain style, with additional pendants or intricate does not help to fulfill the tasks assigned to it, prefer simple, original red threads. The latter do not see anything unusual in this, especially women. They, on the contrary, select the red thread under the clothes.

To deny the unknown is stupid. Even if atheism and unbelief in the other world have been vaccinated since childhood, or obtained as a result of academic activity. In any case, wearing an amulet involves faith in magical actions. Only this way the red thread helps and is capable of miracles. And the doubts are characteristic only of skeptics and stale people who betray their own mistrust and poor knowledge of pragmatism.