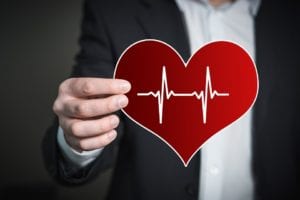 Diseases of the heart and blood vessels can for a long time not manifest themselves as classic symptoms in the form of specific pains and various dysfunctions. Nevertheless, every micro-insult, every “silent heart attack” significantly increases the likelihood that the next time a person will suffer “really – with getting into resuscitation, with complications and disability.
Can I predict possible problems? The sick heart and blood vessels can manifest themselves in a very unusual way. If you know such symptoms, you can get to the doctor and begin the prevention of the disease before she takes a part of a person’s life, if not all of his life.

In 1973, Dr. S. Frank discovered that most people with atherosclerotic lesions of the coronary arteries on the ear have a specific fold. The most surprising thing was that Frank’s sign was found even in sufficiently young people under the age of 40 – and in 80% of cases it corresponded to atherosclerosis of the major blood vessels of the heart. Not surprisingly, the presence of Frank’s sign also indicates an increased risk of sudden death from heart disease and early aging.

It is interesting that this sign was better “worked” for men than for women. And quite useless fold of Frank was in the supervision of American Indians and Japanese – they for some reason, the relationship between the presence of the “Frank sign” and ischemic disease was not revealed.
And in May last year, Israeli scientists said they had found an easy way to predict the rapid development of a stroke in the earlobe. It is again about the Frank’s sign – its presence suggests an increased risk of stroke or even a micro stroke.

Cardiologists say: Frank does not always have the presence of a fold. It certainly speaks about heart problems. However, when it is detected, it is worthwhile to see a doctor and take a survey. The converse is also true: if there are no folds on the ear, there is no guarantee that a person has a healthy heart, no one will give.

2. Symptom of tympanic sticks and congenital pathologies of the heart

The physicians of the time of Hippocrates knew about the characteristic thickening of the last phalanges of the fingers on the hands with the deformation of the nail. Actually, it was he who first drew attention to this unusual symptom and called it “a symptom of the drumsticks.” His followers, in turn, wrote about “the fingers of Hippocrates”, and in 1918 doctors added to the description of Hippocrates fingers fingernails in the form of hourglasses.
This symptom develops because of the excessive proliferation of connective tissue located between the bone of the phalanx and the nail. What exactly provokes tissue hyperplasia is unknown. Among the alleged causes – chronic hypoxia (lack of oxygen in the blood), because of which the vessels of the extreme phalanges are expanding and the blood circulation in these areas is increasing. Phalanges produce a growth factor, which causes tissue hyperplasia.

Nail clubbing are observed in many diseases, among which there are pathologies of the gastrointestinal tract, lung diseases, certain hereditary diseases, even HIV infection and vibration disease. This list includes heart disease – infective endocarditis and some congenital heart defects.

Xanthomas are formations that are formed in different tissues of the body in cases of violations of fat metabolism. Yellow rounded formations, consisting of mutated cells with fatty inclusions, appear on the eyelids, buttocks, knees and other parts of the body. The xanthomas themselves are not dangerous to the body, but they say that the person has an abnormally high level of cholesterol in the blood, and this refers to “bad” cholesterol (low density lipoproteins, LDL).

Xanthomas can develop against a background of familial (hereditary) hypercholesterolemia, but can also be the result of some diseases – diabetes, liver and pancreatic diseases, obesity. In the hereditary form of the disease, the cause of the disease is a gene mutation, which encodes the LDL receptor. With this mutation, “bad” cholesterol is no longer absorbed from the bloodstream, but continues to accumulate there. As a result, it is deposited not only in the form of a xanthom, but also on the walls of the vessels.

Hereditary hypercholesterolemia may be homozygous (mutation exists on both paired chromosomes) or heterozygous (mutation exists only on one of the chromosomes). With a homozygous form, the concentration of cholesterol in the blood is so high that xanthomas (and clogged blood vessels) are formed in the first 10 years of life – and with them, severe cardiovascular pathologies. Such a patient rarely lives up to 20 years. With the more common heterozygous form of the disease, xanthomas begin to appear after 30 years, and elderly patients are guaranteed to acquire ischemic heart disease. Men, and in this case, more often women suffer from the consequences of the disease.

4. Cyanosis of the lips and oxygen deficiency in the blood

In particular, blue lips speak of problems with the heart and blood vessels, because of which the tissues lack oxygen. Oxygen starvation and blue lips are observed at PE – pulmonary embolism, with various forms of heart failure, etc.

The connection of heart diseases with dental diagnoses was revealed long ago. Untreated caries, inflammation of the periodontal (tissues surrounding the tooth) make the oral cavity a hotbed of bacteria. Pathogenic microorganisms penetrate the body and can cause the development of endocarditis – inflammation of the inner shell of the heart. And in this case, men are at high risk.